AN ACTIVE 22-year-old was hooked up to a life-support machine after a “one in six million” rare diagnosis.

Sam Parker found himself needing life-saving treatment at Wythenshawe Hospital in Manchester after he felt nauseous and had a headache part-way through a run. What he first believed to be dehydration soon turned out to be a rare type of tumour, most often diagnosed in people much older.

Just before Christmas, Sam was placed on an ECMO (extracorporeal membrane oxygenation) machine, which had to take over his heart and lung functions to keep him alive.

Sam, who is now recovering well back home in Clitheroe, Lancashire, is so thankful for the support and urgent medical care he received, he is fundraising for Wythenshawe Hospital Charity.

“Without the ECMO team, I probably wouldn’t be here today. So it’s a big ‘thank you’ to them and we will keep fundraising for them throughout 2021.”

Sam first felt unwell in February 2020. He was out on a run and came to a hill he would normally manage quite easily but started experiencing such a severe headache and nausea he had to sit down for half an hour. The headache continued for two or three days but Sam put the symptoms down to dehydration. When it happened again, he sought help from his GP.

“The doctor referred me for some tests and they found my blood pressure was raised, so they monitored that for a while,” explained Sam. “They put me on blood pressure medication, which was quite concerning. I kept thinking ‘I’m 22, why is this happening? I eat well and I’m fit and healthy.’

“They were worried too and they looked into it further. I had an ultrasound which showed a mass near my right kidney. So then I had a CT scan, an MRI scan and another CT. I saw specialists at Lancaster and The Christie and that’s when they confirmed it was a tumour.”

Sam was told he had a paraganglioma – a rare tumour most often diagnosed in people aged 30-50. Sam’s tumour was a sub-type known as pheochromocytoma, which made his diagnosis even more rare, as these tumours happen in the adrenal glands. For Sam’s symptoms to have come on so quickly, doctors believed the tumour had grown very rapidly.

“It was pretty daunting,” he said. “There is a strong history of cancer in my mum’s side of the family but not this type of cancer and nothing in someone as young as me.

“They told me it was a one-in-six-million chance and the fact it happened in the adrenal glands made it even rarer.

“I tried not to worry too much and just thought, well I’m in the right place to get it sorted.” In mid-November, Sam was ready to be admitted to hospital for his tumour to be removed. He spent two weeks on the pre-surgery ward in Lancaster to prepare him for surgery on 3rd December. Doctors had anticipated the surgery would take about 4 hours, but in the end it took 9 hours.

“The tumour was wrapped around the main artery of my kidney,” said Sam. “So that made things more complicated as they had to figure out how they were going to go in and get it all.

“Afterwards I went to the intensive care unit (ICU) and the next morning a nurse was helping me out of bed into the chair beside me. I slid down the chair onto the floor and don’t remember anything else after that.”

Some of the fluid produced by the tumour leaked into the bottom of Sam’s lungs during surgery. When he moved from the bed to the chair, this had caused his lungs to malfunction and rapidly decreased the amount of oxygen moving around his body. It became clear he would need the ECMO machine to take over his lung function, or he wouldn’t make it, so the team in Lancaster asked the Wythenshawe ECMO team to come and stabilise him before they could blue-light Sam to Manchester. His family were called into the hospital to say their goodbyes.

“I walked in and his eyes were taped up and I just remember thinking this doesn’t happen in real life, it happens on TV,” said Sam’s mum Julie, who went to the hospital with husband Ian and older son Josh. “Sam had tubes all around him and I could barely see him underneath it all. I kissed him on the forehead and whispered in his ear ‘you can do this, come on’.

“Ian was too distraught to see him, it was just too hard.

“After that we were driving home and I just remember being angry at the world that everyone was carrying on as normal and my youngest son was fighting for his life.”

Sam was on a portable ECMO machine down to Wythenshawe in South Manchester, and then placed on a more sophisticated machine for 5/6 days. The treatment, reserved for those with severe lung and/or heart failure, works by pumping a patient’s blood through an oxygenator (artificial lung) outside of their body. The unit at Wythenshawe is one of only five permanent adult ECMO centres in the UK. Without this treatment to get enough oxygen around his body, it’s likely Sam would not have survived.

However, his young age and fitness played in his favour and soon he was decannulated, removed from his ventilator and able to breathe on his own.

“Once I was stable enough at Wythenshawe I went to back to Lancaster,” explained Sam. “At first they tried getting me to point my toes and touch the end of the bed but I couldn’t even do that. I had to have physiotherapy to learn how to move and walk again. Everyone kept saying I had youth on my side. The nurses had to assist me out of the hospital and when I first got home my parents had to do a lot of things for me.”

Thankfully the family had him home in time for Christmas and now Sam is on the road to recovery. He has had to do more desk work in his job as a maintenance engineer and still needs to be careful not to exhaust himself. But now he is more focussed on the things that matter in life, and one of them is giving back to the team who saved his life.

“It definitely changed my perspective on things,” said Sam. “I think I was a bit moody and a bit of a pessimist before but now I just want to get doing things and not wait around. I want to get a house with my girlfriend April. I don’t worry or dwell on things too much now, there’s no point.

“I want to raise money for Wythenshawe Hospital Charity. My mum, Nanna and auntie alongside her business partner Judith are selling Easter bags, my dad is doing a long-distance cycle ride with friends and we just want to raise as much as we can.” All the funds raised by Sam and his family will go to Wythenshawe Hospital Charity, which supports continuing excellence in treatment, research and care and has three main areas of work:
• to provide state-of-the-art equipment for diagnosis and treatment
• to support research projects to improve our understanding of illnesses
• to help to create an environment that’s more friendly and welcoming to our patients, their families and visitors.

Wythenshawe Hospital Charity’s Community Fundraising Officer, Jo Thomas, said: “Sam is such an inspirational person and it’s a relief to hear he’s now on the mend and getting better each day.

“It’s incredibly kind of Sam, and all his family and friends, that they want to give back to the hospital and fundraising for the ECMO unit’s fund.

“We will be supporting them all throughout their fundraising and can’t wait to see how they get on.” 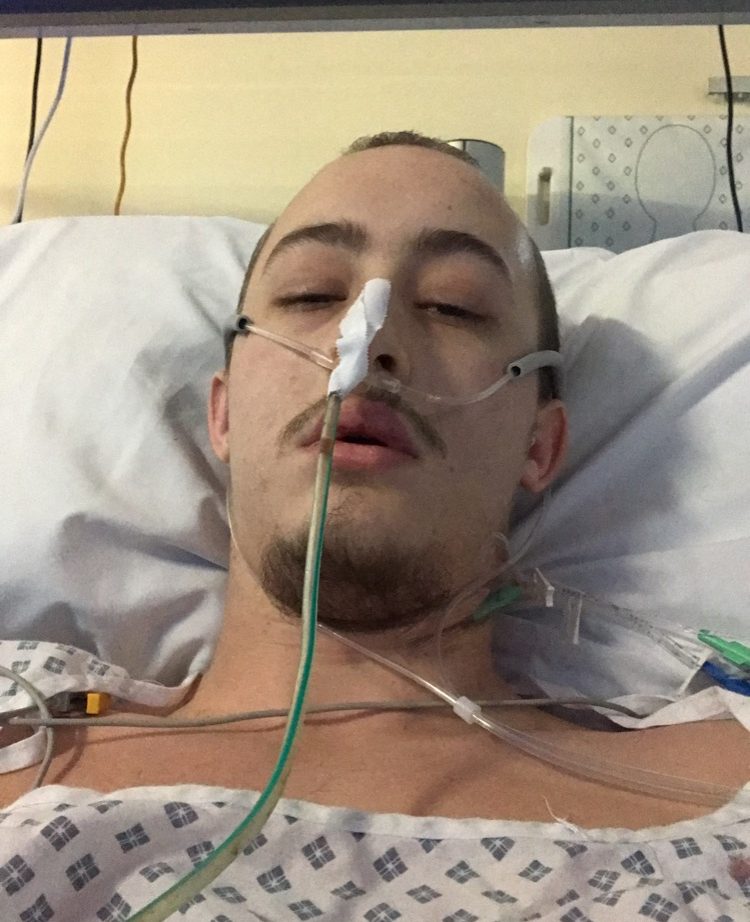