A FORMER Army and police trainer who may only have a few years left to live is taking on a 100-mile cycle challenge for the hospital treating him.

Alan Deary was shocked to learn his diagnosis of Idiopathic Pulmonary Fibrosis (IPF) meant he had a life expectancy of 2-5 years. But determined to give something back to the NHS and medical teams who have supported him, he decided to complete a two-day bike ride to raise funds for Wythenshawe Hospital Charity. The funds will be used at the hospital’s specialist Interstitial Lung Disease Unit in south Manchester, which has a dedicated clinical, nursing and research staff providing care for patients with lung fibrosis and related conditions.

Alan, who lives in Old Swan, Liverpool, says the money he raises will be going towards a worthy cause and will enable him to do something for other patients and their families.

“I wanted to do something that would benefit other people,” said Alan. “The team at the Interstitial Lung Disease Unit at Wythenshawe Hospital have been really good with me. I haven’t had that many dealings with them, but I do go for blood tests and lung functions tests and they’ve always been great. I’ve also been able to phone them any time I want.

“I thought to myself, even if I only raise £100 for them, that might be something. But actually the JustGiving Page is now over £700. The most touching thing is the anonymous donors – they don’t want any recognition but it’s nice that they’ve read my story and want to help.”

Researchers have several theories about what might trigger IPF, including viruses and exposure to tobacco smoke. Some forms can be hereditary and passed from one generation to the next. All forms are progressive and life-threatening, but early diagnosis and treatment can improve survival times.

Alan, who is 61, was diagnosed with Idiopathic Pulmonary Fibrosis in 2019, after previously good health and no family history of IPF. Before his diagnosis, Alan worked in health and fitness most of his career, so the news came as quite a shock.

“I was in the Army 16 years and worked with the national police training new recruits in fitness and self defence,” explained Alan. “Fitness is a huge part of who I am and a huge part of my life.

“But in 2019, when I was living in Cumbria, I had a chest infection I just couldn’t get rid of, so my GP sent me for a CT scan. The results came back and I was told over the phone I had IPF.

“Obviously the first thing I did, which they always tell you not to do, is look it up on the internet. My ex-partner Jacquie Taylor, who was my partner at the time, works in healthcare and looks after people with lung conditions and she said ‘be very careful about going online’. She was absolutely right. But I’m an analytical person and need to know how everything works so I did it [the internet search] anyway.

“When I got the diagnosis I decided to move back to Liverpool. I grew up in the city and it also meant I had better access to lots of specialist services, including being a much shorter drive to Wythenshawe Hospital.

“I’ve found it very difficult to come to terms with the fact the average life expectancy is 2-5 years. That was the hardest bit to deal with. I’m still struggling with that now, but I am receiving counselling and that is really helping me. I strongly believe in counselling and getting support for your mind as well.

“How you cope with things is all about perspective. I thought about how much of my life I’d done things to benefit me and this was a time to do something for other people. Which is why I wanted to do the bike ride.”

Alan, who now works for an organisation which supports adults with autism and Asperger’s, is planning the ride on the weekend of 2nd/3rd October. Jacquie and other friends and family will be joining him while Alan’s niece Amirah has been integral in helping Alan with the technical side of things, such as sharing the fundraising page on social media. Alan said: “With lots of health conditions, they tell you three main things to look after – your diet, keeping up regular exercise and limiting alcohol. So the bike ride will be ticking one of those boxes. I do sometimes get out of breath more easily than I used to though, so I’m just going to go at a steady pace and not push myself beyond my limits.

“On the first day we will do Liverpool to Southport and back. We’re still deciding on a route for the second day. We will have friends who are travelling from Anglesey and Cumbria to join me so they won’t want to have far to travel back home after the cycle finishes.”

All the funds raised by Alan and his friends will go to Wythenshawe Hospital Charity, which supports continuing excellence in treatment, research and care and has three main areas of work:
• to provide state-of-the-art equipment for diagnosis and treatment
• to support research projects to improve our understanding of illnesses
• to help to create an environment that’s more friendly and welcoming to our patients, their families and visitors.

Wythenshawe Hospital Charity’s Community Fundraising Officer, Jo Thomas, said: “Alan is doing a wonderful thing for an amazing cause. Being a patient himself, he realises how vital our services at Wythenshawe Hospital are to people like him and how Charity funding enables us to provide the very best equipment and research while delivering the very best care in a welcoming environment.

“We can’t wait to hear how Alan gets on with his bike ride and we know the support of his friends and family will be vital during those more tiring or weather-challenging parts of the ride. We’ll be cheering him on virtually from Manchester. Go Alan!”

To donate visit the “Alan 100 Mile Cycle“.
To find out more about Wythenshawe Hospital Charity visit our Wythenshawe page. 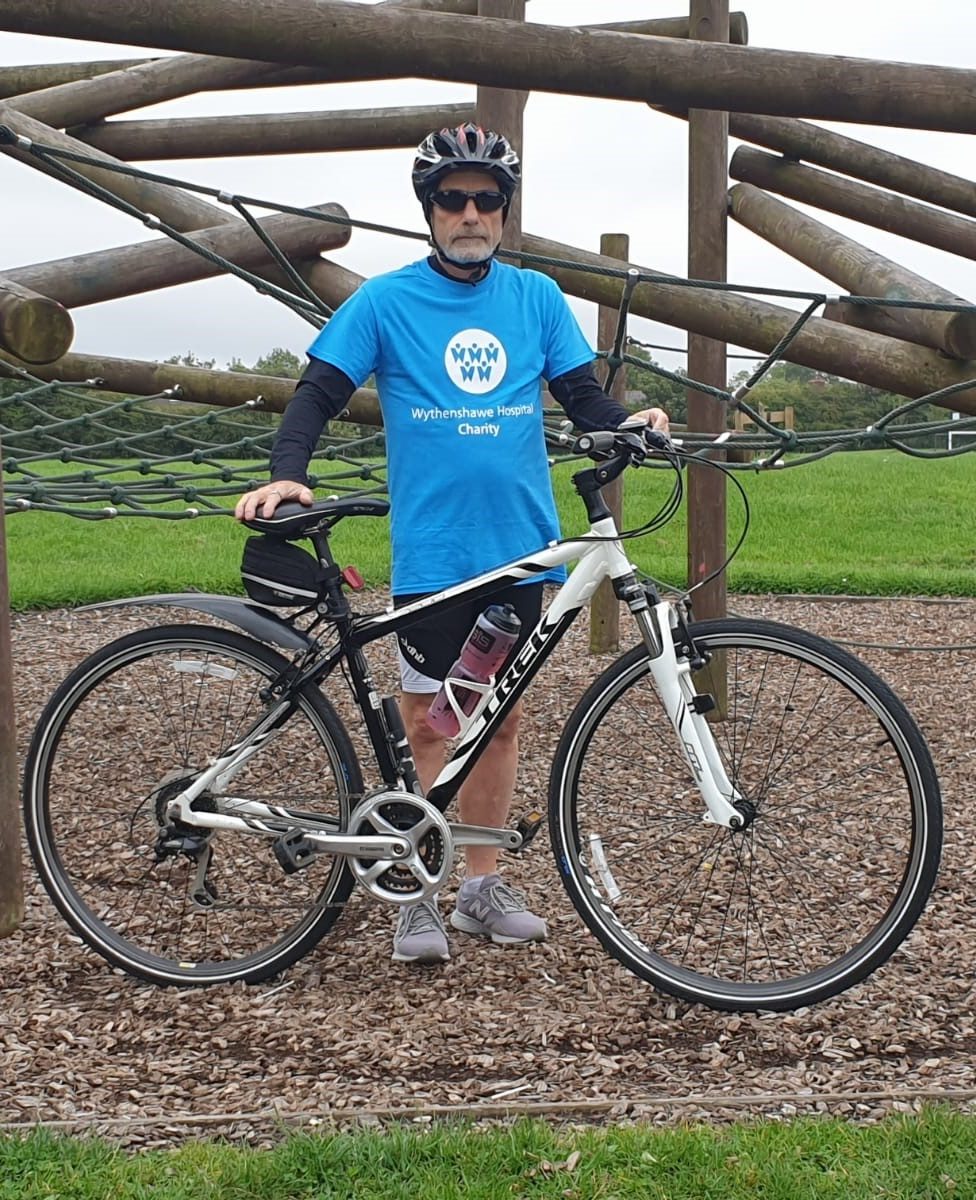