THE auntie of a young baby who was operated on during her birth has fundraised for a Manchester hospital which helped save her niece’s life.

Baby Kayleigh Deaville was diagnosed with a large teratoma on her neck – a rare type of tumour – while still in the womb. A multidisciplinary team of 34 specialists from both Saint Mary’s Hospital and Royal Manchester Children’s Hospital helped perform a complicated surgery to save her life.

In order to carry out the surgery to remove the tumour, Kayleigh was delivered by caesarean section, but only partly up to the top of her shoulders. This allowed the theatre team to then begin the complex procedure on Kayleigh’s neck. Skilled surgeons were able to secure the airway, whilst the placenta continued to provide Kayleigh with oxygen while she was still partly in the womb. You can read more about the surgery here, in a press release issued last month.

Kayleigh’s miracle operation and birth was the inspiration behind her auntie Jodi’s fundraising and the family has been able to donate £1,000 to Saint Mary’s Hospital Charity.

Jodi Molloy, who lives in Fenpark in Stoke-on-Trent, cycled the equivalent of traveling from her home to Saint Mary’s Hospital and back on a static bike – 100miles over four days. Jodi, 26, said: “We all wanted to find a way to say ‘thank you’ to the wonderful staff who looked after Kayleigh.

“You’re limited in what fundraising you can do during these times – my first idea was a sponsored head shave but I decided against that seeing as I’m getting married in 2022. So then I looked up the distance to the hospital and decided to do a static bike ride instead.

“I’m not the fittest person, so it really was a big challenge for me. It was really tough and there were honestly times when I felt like giving up, but it was totally worth all the effort to get to £1,000.”

Kayleigh, who is now back at home with dad Will, mum Deb and older sister Billie, has been thriving. She is now a healthy weight and loves nothing more than playing with family and giving them a big grin and cuddles.

Will said: “It was a total surprise to us when Jodi announced she wanted to do the fundraising. A lot of people dug deep to donate so it really meant a lot to us.

“Kayleigh is really showing her character now – she is a very happy baby and she always has a massive smile for us. She’s doing so well.

“She’s still being fed through her NG tube and eventually she will need more surgery, as a little bit of the tumour still remains. But we’re so happy with how she is doing.” Jodi’s funds will be going to the Neonatal Intensive Care Unit (NICU), the team which cared for Kayleigh after she was born.

Shannon Appleyard, Community Fundraising Officer at Saint Mary’s Hospital Charity, said: “Kayleigh is such a smiley baby so I’m sure that face really spurred Jodi on during her challenge. It’s great to hear she is doing so well.

“Jodi has raised a fantastic amount and the money will make a real difference to families of young babies who are cared for in NICU. We want to thank Jodi and everyone who donated for choosing to fundraise for Saint Mary’s Hospital Charity.”

You can  find out more about Saint Mary’s Hospital Charity here. 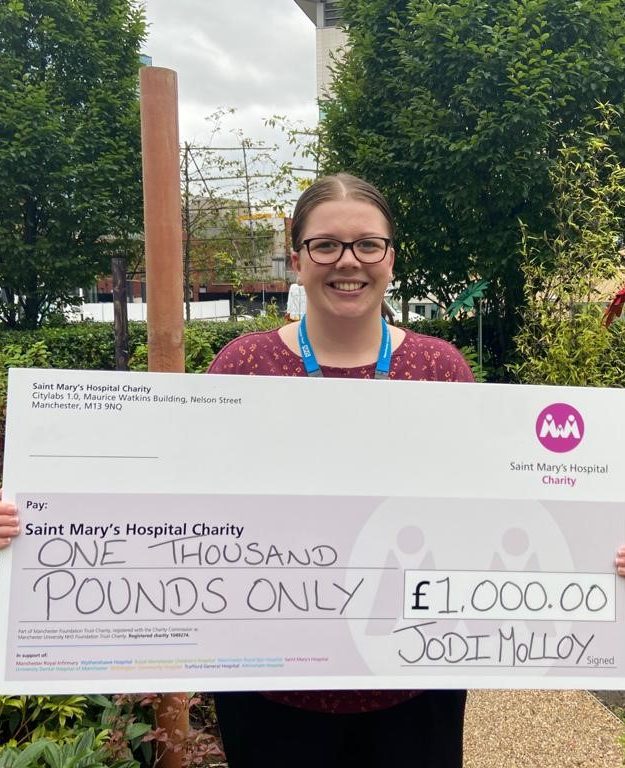