A WIDOWER who watched his wife battle pneumonia and sepsis for months before sadly passing away in hospital is taking on the Virgin Money London Marathon.

Andy Smith made a daily 110-mile round trip from Bingley to Wythenshawe in Greater Manchester for three months to visit his wife Sharon in hospital, before she deteriorated and died in June.

He has now decided to take on the 26.2mile Virgin Money London Marathon to raise money for Wythenshawe Hospital Charity, inspired by nurses who were “true angels” at looking after Sharon and her family.

“The whole team were just brilliant with Sharon, true angels” said Andy, who lives in Bingley with his children Amelia, 17, and Lewis, 15. “They were always making sure we were alright – not just caring for Sharon but also asking me if I’d eaten or if I’d had enough sleep.

“They looked after her from a medical point of view, obviously, but it was the other things too. One day I came in and they’d washed her hair and sprayed some nice perfume. That was really thoughtful.”

In March 2018, Sharon, who worked as a medical secretary, had been feeling rundown and poorly for about a week. It was Andy who eventually persuaded the 46-year-old to see her GP, where the doctor immediately rang for an ambulance.

Medics told the couple, who married in 2001, that Sharon needed an ECMO (extracorporeal membrane oxygenation) unit. Currently there are only 5 ECMO adult units in the country – the nearest being 55 miles away at Wythenshawe Hospital in Greater Manchester.

“I just didn’t know what was going on,” said Andy. “They didn’t give us a diagnosis at this point – they only knew that her lungs weren’t working properly and she’d need help. The next 24 hours were just mad.

“She was a really strong and stubborn person, a typical Yorkshire woman, she just wanted to get on and thought it would be fine. I’m glad I’d dragged her to the GP.”

Just a few days after arriving at Wythenshawe, it was clear Sharon’s lungs, liver and kidney were all starting to fail and that she was suffering from pneumonia. Andy was told to prepare for the worst.

“I had to tell my kids we were going to lose mum today,” said Andy. “We prepared to say goodbye. But then throughout the day she started to stabilise.”

Slowly Sharon started to make improvements, but remained in a coma to help her body recover. With all the tubes and machinery around her, there was barely room for Andy’s chair next to her bed. But he managed to squeeze in enough to hold her hand.

“On 21st April she came off the ECMO,” said Andy. “She was well enough to breathe on a ventilator – she still wasn’t breathing for herself, but it was a massive improvement. Over the next two or three weeks she was weaned off the ventilator too and they slowly got her breathing by herself again.”

Sadly Sharon’s circulation had been so poor, her feet had become swollen and purple and the decision was made to amputate her legs just below the knees. After the operation, Andy and Sharon were able to spend some time outside for their wedding anniversary.

“It was really lovely to sit outside and chat,” said Andy. “We were really positive and we knew that whatever happened we’d be okay.”

Just a few days after that magical day, Sharon’s condition once again deteriorated and she struggled to breathe again. Pneumonia and sepsis took over her body. “I knew at that point she wasn’t going to make it,” said Andy. “She wasn’t strong enough to put up a second fight.”

In the early hours on 27th June 2018 Sharon passed away. Andy was right there by her side.

“I’ve done a couple of things to fundraise for Wythenshawe Hospital Charity – just because I’ve seen for myself how amazing the NHS really is,” said Andy. “We held a Valentine’s Ball on Sharon’s birthday this year and I’ve done the Great North Run too.

“The London Marathon will definitely be the hardest thing I’ve done. But when I’m out training and I feel like giving up, I speak to Sharon in my head and she pushes me on.

“We miss Sharon every day, of course, but the kids have got their whole lives ahead of them. I don’t want them to be negative – we’ve stayed very positive as a family.”

Andy has already raised more than £4,500 from previous events. He hopes his marathon run will raise a further £2,500.

Sarah Naismith, Director of Wythenshawe Hospital Charity, said: “Andy’s positivity and determination is remarkable. His dedication to our charity and his faith in the NHS is touching to see.

“We wish him all the best with the Virgin Money London Marathon and hope he enjoys what will be a challenging, but fulfilling, experience.” 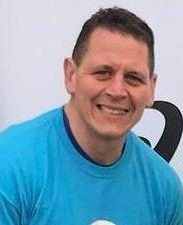