The remote-controlled Mercedes vehicles have parked up at Royal Manchester Children’s Hospital, thanks to a kind donation by Medacs Healthcare.

Three-year-old Thomas Brennan was one of the first youngsters to have a ride in one of the vehicles, channelling his inner Jenson Button to “brum brum” round the corridors before an operation.

Thomas’ mum Lisa Brown said: “Thomas has had more than 16 operations and he often gets anxious before surgery – he knows when we’re heading down the corridor what’s going to happen.

“Because he is deaf he is very visual and the look and feel of the car really excited him. It completely took his mind off the surgery. His face lit up riding in the car.”

Thomas was born in December 2015 with a number of health conditions. His main issues have been respiratory problems, a cleft lip and palate, ophthalmology problems, a missing thumb, one kidney and he is also profoundly deaf. He has also been diagnosed with VACTERL association – a disorder affecting many body systems.

Thomas now stars in a new video about the cars, made by staff at the hospital, which looks like a spin off the popular BBC programme Top Gear. The video shows Thomas riding around in the white Mercedes before smoothly parking up in one of the allotted spaces next to the children’s theatre.

Lisa, who lives in Burnley, said: “He loved every minute of it and all the worry just left when he rode the car to surgery.

“He was waving at all the staff as he went – he was like the Queen doing her royal wave.”

The three Mercedes vehicles, which were received by Royal Manchester Children’s Hospital Charity earlier this month, are available to 3-8 year olds who weigh no more than 30kg.

They are only suitable for non-emergency surgeries, so will be predominantly used by elective surgery patients from Ward 76. They only suit children who can sit comfortably in the car, so anyone wearing splints or anyone who had been administered a pre-med wouldn’t be able to ride in the car.

Although the children can press buttons and move the steering wheel, the cars are remote controlled by an adult – ensuring there are no crashes or bumps and the cars can easily be transferred back to the ward once the child has climbed out ready for surgery.

Lead nurse Walter Tann said: “These cars will really improve the patient and family experience when heading down to surgery.

“It’s not only a welcome distraction for the children, but the parents enjoy taking photos and seeing their child having fun before they head into surgery.

“We’re currently using them at Royal Manchester Children’s Hospital. Children having surgery at Manchester Royal Eye Hospital can also ride in style if they meet the criteria.

“We’re hoping to be able to send cars to our Starlight Unit at Wythenshawe Hospital and our children’s ward at Trafford General too.”

The donation was kindly made by staff at Medacs Healthcare. Money to purchase the cars was raised through direct sponsorship and a number of staff initiatives.

Vikki Nixon and Sarah Heyes from Medacs Healthcare visited the children’s hospital last month to see the cars in action and meet with staff from both the hospital and Royal Manchester Children’s Hospital Charity. 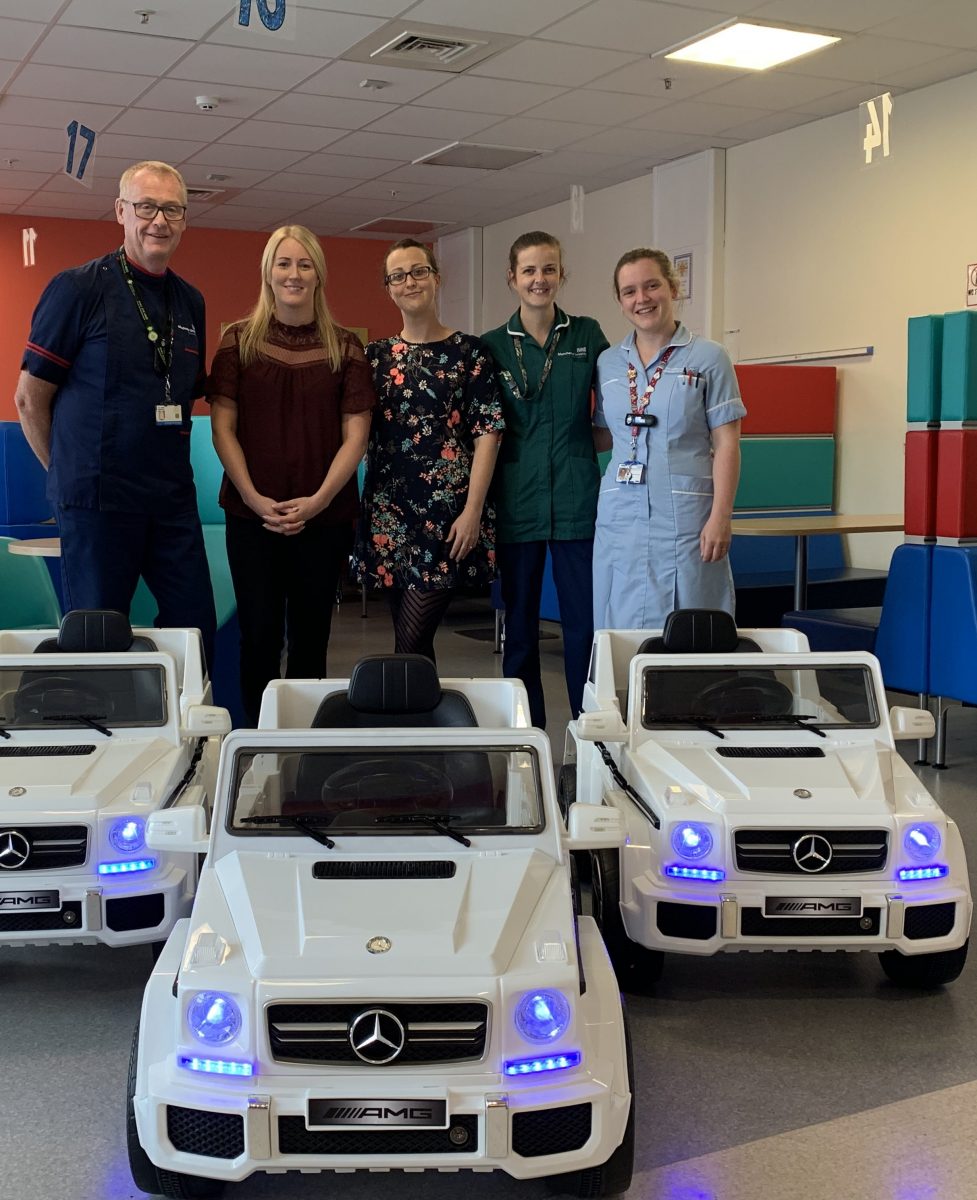