FAST, fab and fit at forty – a clinical scientist is part-way through an epic challenge to clock up 1600km before his 40th birthday celebrations.

George Burghel has challenged himself to run 40km per week for 40 weeks in the lead up to his birthday – the equivalent of running from Manchester to Milan in Italy.

Apparently fitting in runs around work and family life with his wife Heather and their three children wasn’t enough for George, as early into the challenge he decided he’d run the rest of the weeks carrying 4kg of weights too!

George, a Principal Clinical Scientist at Saint Mary’s Hospital, has set himself the challenge to raise money for two causes close to his heart: Saint Mary’s Hospital Charity, specifically the hospital’s Neonatal Intensive Care Unit (NICU), and The Christie Charity. He chose these two organisations after his newborn twins received life-saving neonatal care when they were born.

“My twins had life-saving neonatal care at two different NICUs when they were born 10 weeks early and I know many loved ones around the world who have suffered with cancer, including my own mother.

“The challenge has been good so far. I’ve had it all – snow, wind, rain, hail and sunshine…even a sandstorm when I was visiting family in Jordan! I tend to park further away from work and then run 6km into work and 6km back to the car at the end of the day. Doing it that way means I’m not taking out time that I could be spending with Heather and the children.

“I started in January and the idea was to do 10 weeks, then have a week off, then another 10 weeks and a week off, right up until my birthday in November.  But I was finding I didn’t need the rest so I think I’ll just carry on going.”

George and Heather, who are also parents to two-year-old Joseph, had twins Diana and Elias back in August 2016. They were 10 weeks early (their due date had been in October) and were born weighing just 3lb each.

George said: “They needed urgent medical care as they were so premature and small so they were treated at hospitals in Stockport, Tameside and Preston.

“They had to be ventilated and suffered quite a few complications. At the time they were small enough to fit one each on the palms of my hands.

“Thankfully now there are no long-term effects and that’s thanks to the great care we received in the NICUs. They will be turning six this August and they are so lively – you wouldn’t know what they went through when they were born.

“With the work I do, I know a lot of people who work in Saint Mary’s Hospital NICU and I have nothing but the highest respect for all the staff here, throughout our family of hospitals, but particularly at NICU. I feel it’s a real honour and privilege working for the NHS.”

George says he has been an avid runner since he was young and was part of a running club back in Jordan, where he grew up. He recently returned to Jordan to visit family, even keeping up the running during his holiday.

George, who lives with his family south of Manchester, said: “When I was younger I was an excellent runner and I was really fast.

“It’s been harder now I’m older – it was especially hard when I had Covid. I managed to do 19km just running up and down the driveway.

“Now we’re coming into nicer weather I’m finding it easier, but obviously before November it will be rubbish weather again.

“The nicest runs have been when the weather is good but not boiling and when the twins have joined me. We’ve done 5km and 3km together and it was nice to do a slower pace with them. They were very excited when they went back to school after Covid and were able to tell their headteacher I’d been running up and down the driveaway.

“When it’s all over there will definitely be some good 40th birthday celebrations to be had. And plenty of cake!”

“We’re so grateful he has decided to fundraise for our NICU and help support other families of premature and seriously-ill babies. On behalf of the Charity Team I want to say a big ‘thank you’ to George for all his fantastic support.”

Anyone wishing to find out more about Saint Mary’s Hospital Charity can visit this page of our website. 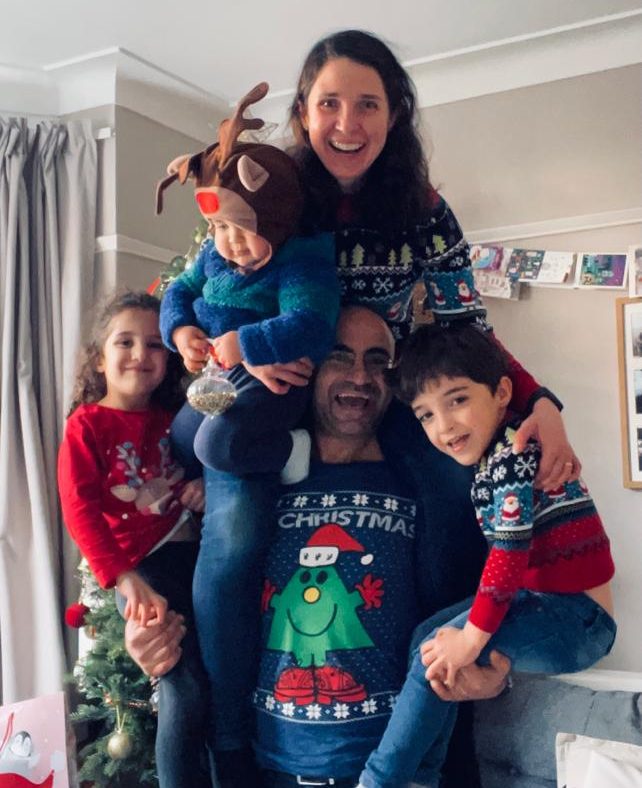 George Burghel with wife Heather and their children Diana, Joseph and Elias