THE FAMILY of a farmhand who suffered 20% burns after a bonfire accident will be fundraising for the hospital which treated him.

On Saturday, 15th August (tomorrow) the family of Scott Goodwin will be holding a Tractor Run to raise money for Wythenshawe Hospital Charity, as a thank you for all the support he was given after his accident in May.

Back on Wednesday, 20th May, Scott, 20, had arranged some branches and leaves in a pile ready to burn after doing some tree clearance at the farm where he works near Buxton, Derbyshire. Unbeknown to him, someone had added a bag to the pile and its thought the bag contained a gas canister or some sort of highly flammable liquid.

When he lit the pile he remembers hearing a loud bang and seeing a ball of flame shooting towards him. Instinctively, his arms went up to protect his face, causing his arm and T-shirt to catch fire. Thinking quickly on his feet, Scott dived into a nearby water trough to extinguish the fire, before managing to drive himself a mile back to the main farmhouse to get help.

“I remember piling all the rubbish up and lighting the fire,” said Scott. “Then I turned round and heard a really loud bang and the fire blasted towards me. I don’t remember feeling any pain or anything. I just remember feeling really shocked.

“I ran to the trough and jumped in to submerge as much of my body as I could.

“I can remember the accident and then getting to our local hospital but after that I was given morphine, gas and air for the pain, so memory wise it was a bit of a blur after that.

“My local hospital showered me and wrapped me up and then sent me straight to Wythenshawe Hospital in south Manchester, because it has a specialist burns unit.”

Before his journey to Wythenshawe, Scott’s cousin Ben, 36, and Ben’s wife Laura had received a message about the accident and rushed to the hospital with his mum Karen to see him for a few seconds before he got in the transfer ambulance.

“We didn’t know it was a burn at that point, we just knew Scott had been in an accident,” said Laura, 37. Becoming tearful as she remembered the moment, she continued: “To find him like that was a shock. He’d only been at our house the night before playing with our kids Harry and Grace. He’d let Grace paint his nails and they were laughing and joking together. Then we saw him covered in bandages wondering just how serious it was going to be.

“You just think the worst and I couldn’t believe what had happened. We were all really worried.”

Scott was sent to Wythenshawe Hospital  – a 50 mile trip from his home – as it has a number of specialist fields, including burns and plastics, serving patients from across the North West.

Sadly Scott’s recovery at Wythenshawe Hospital was hindered by a stubborn infection which wasn’t clearing up. He was taken down to theatre for a skin graft on a number of occasions but was found to still have the infection, meaning it would be too dangerous to proceed with the surgery. After numerous tests, medics were able to diagnose Scott with salmonella, which they think may have been contracted from the water trough.

“It was absolutely horrific – he had three blood transfusions in the hospital and because of Covid we weren’t allowed to go and see him,” said Laura. “That was really hard for us all, because we’re such a close family. Ben and Scott are more like brothers than cousins and the whole family found it a struggle.

“The staff at Wythenshawe were just amazing with him though and I know that really helped lift his spirits.

“But each time he went down to surgery he mentally geared himself up for the operation only to wake up and find it still hadn’t happened. So I know that was really tough for him.

“Eventually he did get the surgery and they were able to take skin from his thigh to graft onto his arm.”

But then more bad news was to come, when Scott and Ben’s granddad died. He had been suffering from dementia but sadly died from Covid-19 related symptoms. The family didn’t think it was right to tell Scott about the death over the phone, so hospital staff allowed them to visit and tell him in person. They arranged for a visit on the 13th June to tie in with Scott’s mum Karen’s birthday – so the occasion could also be a happy one.

Scott said: “When they told me I just felt like things just kept getting worse. We’re really close as a family so losing my granddad while I was in hospital was really awful. I was just gutted.

“I was also in a lot of pain. The burn itself was painful but I found the skin graft from my thigh hurt a lot more.

“Thankfully a few days after my family visited I was allowed home and I was so grateful to be back. It’s been a real pick-me-up to have all my family around me again.”

Although he hasn’t returned to work full-time, Scott has been making  a good recovery and has been able to spend a few hours seeing his work colleagues, as well as playing with Ben’s children Grace, five, and eight-year-old Harry on the farm Ben and his wife Laura run.

“I can’t straighten my arm out completely yet, but I’m having physiotherapy and I’m slowly getting there,” said Scott. “It is still sore and it blisters up sometimes.

“They think that eventually I’ll need to have another operation to cut my skin so I can straighten my arm fully again. But for the moment it’s just the physio.”

As a thank you for all the support Scott received, the family are hosting a Tractor Run this coming Saturday in and around Buxton for Wythenshawe Hospital Charity. Tractors will gather at Ben and Laura’s farm and then set off in convoy around the villages near their home. Scott is hoping to be well enough to drive one of the tractors and will be cheered on by his family and friends.

Scott’s cousin Ben, and his wife Laura, are the main organisers of the event and say almost 100 vehicles are already signed up. They’ve been supported by Scott’s parents, Kevin and Karen, and his sister Emma, 17. The procession will start at about 11am.

Ben said: “We knew we wanted to do something to fundraise and this way we can follow social distancing and still do something which is a big tradition in farming communities.

“We’re asking people to donate £10 per tractor and £5 per passenger. And we’ve had some great raffle prizes donated from local businesses so we’ve already got more than £2,000. But I know on the day Laura is keen to raise £5,000. If it’s a success I’m hoping we can make it an annual event.”

Speaking about his motivation behind running the event, Ben said there was absolutely no question about doing something in Scott’s honour. He said: “We’re very close and I see him as a younger brother rather than a cousin.

“We all know we’re really lucky and things could have been so much worse for Scott. I don’t like to think what could have happened.

“He’s been through a life-changing experience, so he has been a bit reserved, but he’s getting there. Since he’s been home he’s come on leaps and bounds and seeing him laugh and joke with Grace and Harry has been lovely.”

All funds raised from the Tractor Run will go to Wythenshawe Hospital Charity, which supports continuing excellence in treatment, research and care and has three main areas of work:
• to provide state-of-the-art equipment for diagnosis and treatment
• to support research projects to improve our understanding of illnesses
• to help to create an environment that’s more friendly and welcoming to our patients, their families and visitors.

The Charity’s Community Fundraising Officer, Jo Thomas, said: “Hearing what Scott has been through and seeing photographs of him returning home, you’d be forgiven for thinking it was two different people.

“Scott has done incredibly well in his recovery and his family are in no doubt that’s thanks to the expert medical care he received at our hospital.

“We’re very honoured that they have chosen to fundraise for Wythenshawe Hospital Charity and I can’t wait to hear how the Tractor Run went. I’m sure they’ll have a great time and it will be a memorable way to not only raise funds, but to celebrate Scott’s return home. I wish them all the best of luck.”

Click to find out more about Wythenshawe Hospital Charity. 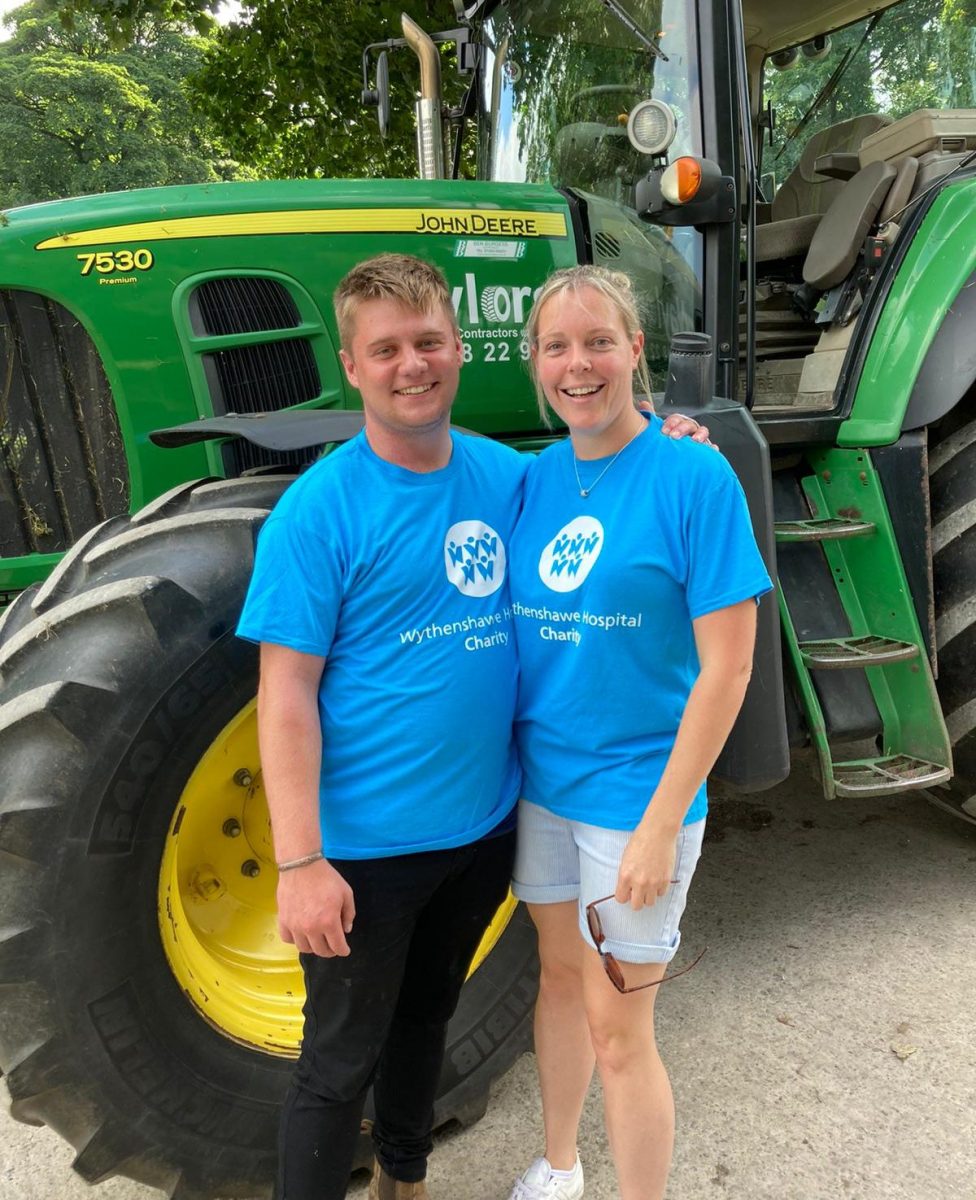