A FAMILY in Bury are now officially Guinness World Record holders – thanks to a “magic zip” and an event dreamt up during lockdown.

Dad Tom, mum Gemma, son Charlie and daughter Sofia came up with the plan to hold a record-breaking online quiz to raise money for the Charity after starting online quizzes during the first Covid lockdown in 2020. They were inspired to support the children’s hospital after Sofia had a hip operation there – the scar from which she now refers to as her “shark bite” or her “magic zip”.

Tom hosted the online quizzes and the 48-hour live stream quiz from Bury, but it attracted quiz fans from across the world – including the UK, USA, Iceland, Spain, Vietnam, Japan, New Zealand, and Australia. Rather than charging people to join the Guinness World Record attempt, Tom asked for donations to the Charity instead.

Tom, who works as an event host, said: “Honestly, it’s absolutely fantastic to finally hold the certificate in my hands and know we’re all Guinness World Record holders. It means the world to me. It’s a dream come true.

“The challenge was actually held in August 2021 but, rightly so, Guinness have very strict criteria and need lots of evidence submitting before they can name you as a record holder. All the participants have been so eager to find out if we got – finally being able to tell them ‘yes’ is so amazing.

“The 48-hour quiz, which we called Never Gonna Quiz You Up, raised £7,000 but the actual total raised for Royal Manchester Children’s Hospital Charity with our lockdown quizzes and one in-person anniversary quiz is more than £15,400. It’s hard to believe it all started with me suddenly having a lot of time on my hands – there wasn’t a big call for event hosts during lockdown – and thinking of something to do that would keep people smiling during quite a scary time.”

Throughout all the quizzes and fundraising, little Sofia has been Tom and the family’s inspiration. Sofia, now seven, was diagnosed with development dislocation of the hip (DDH) when she was just three years old. The condition meant Sofia had a ‘floating leg’ – the leg joint wasn’t connected to her hip and it was nothing short of a miracle she was still able to walk.

Her diagnosis meant she had to endure an intense operation to break her leg bone and then reposition it before surgeons attached metal plates to hold everything in place. A further surgery took place to remove the plates but Sofia will need another operation to remove some screws. There is a chance Sofia will develop arthritis much earlier in life than normal as a result of her condition.

Tom said: “The 48-hour quiz was far more physically and mentally challenging than I’d ever expected, but I also know that Sofia has endured so much in hospital too, and that’s essentially what kept me going.

“I spent so much time planning the quiz and the questions and getting all the technology ready, I didn’t think about conditioning my body to go without sleep for an extended length of time. Working in the events sector I do unsociable hours through the night, so I hastily presumed 48 hours would be relatively manageable. How wrong I was! Staying awake, staying active, staring at screens, reading questions, and remaining engaged with the players was by far the biggest challenge I faced.

“I did have guest hosts for the odd hour to cover me, but even when I stepped away for a break it wasn’t a proper rest and they were only very short breaks. I hosted the 48-hour quiz from The Red Hall in Bury so I wasn’t at home either. As a result, I was constantly thinking how much I missed my family but also how much I wanted to make them proud.

“Both our children have shown such bravery and determination in their lives. They were what kept me going.”

The certificate now hangs in pride of place at the Finkill family home and is something they can treasure forever.

Gemma said: “I’m so incredibly proud of Tom. He put in so many hours behind the scenes but always with a smile on his face. He’s not one to complain, but I saw how hard the challenge was for him.

“Being a Guinness World Record holder is not something a lot of people can claim. It’s a story we will be dining out on for quite a while to come.”

All the money raised during the quizzes has gone to Royal Manchester Children’s Hospital Charity, which funds treatment, research and care projects and the hospital. These projects help to improve the hospital experience and benefit patients, their families and staff.

Georgia Sleigh, a Charity Relationship Officer, said: “I loved taking part in the quiz but I have to hold my hands up and admit I wasn’t there for the full 48 hours like some of the players.

“We did however head down to The Red Hall to watch Tom close the event and celebrate the end of an incredible fundraising challenge. It’s not one we’ve ever seen at the Charity before so it really was a special day.

“Tom and his family are such an inspiration. We can’t thank them enough for everything they have done.”

If you’ve been inspired to take on a fundraising challenge for Royal Manchester Children’s Hospital Charity email charity@mft.nhs.uk 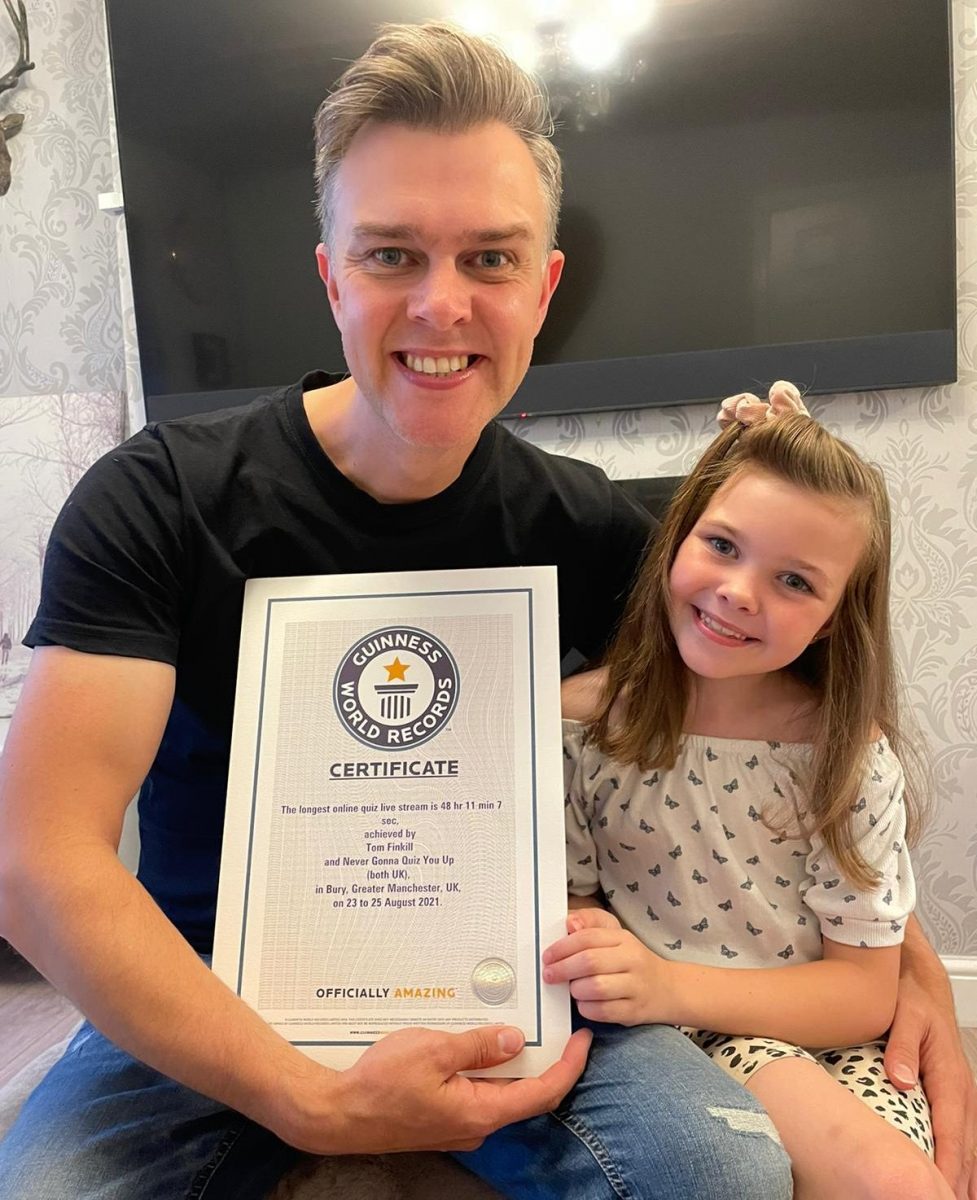