The UK’s favourite Italian chef, Gino D’Acampo, met with patients at Royal Manchester Children’s Hospital as he presented a cheque for £10,000 to the hospital charity.

The donation of £10,000 follows the creation of a special Humphrey Granny Smith Martini cocktail and mocktail, from which £1 of every sale has been committed to the charity.  The big hearted chef and father of three also pledged £1 from every sale of Margherita pizza.

The initiative, which continues across the charity drinks and restaurant’s ‘pizza of the week’, is part of an ongoing charity partnership.

Receiving the cheque on behalf of all at the hospital was Group Deputy Chief Executive of Manchester University NHS Foundation Trust Gill Heaton and Head of Nursing at Royal Manchester Children’s Hospital, Michelle Milner.

“Our patients and their families absolutely loved meeting Gino! Visits like this really do lift spirits in the hospital, especially for patients who are treated long-term on the wards so we’d like to extend a big thank you to Gino for giving up this time to visit the hospital.

“We are looking forward to working together in the future, developing exciting new charity initiatives which will ultimately make a huge difference to children treated at our hospital.”

Gino added; “The Royal Manchester Children’s Hospital is a truly magnificent organisation.  Gill, Michelle and all of the team here work so hard to make such a positive difference to children’s lives.  I didn’t hesitate in choosing them as my nominated charity for My Pizza & Prosecco Bar, Next, Manchester Arndale.”

The presentation was followed by a walk of Ward 77, Royal Manchester Children’s Hospital’s speciality surgical ward, specialising in Renal, Urology, Cleft Lip and Palate, General Surgery and Opthalmology, where the cheeky Italian chef met with patients and their families.

Amongst those Gino got to chat to was seven year old Max Jones from Whaley Bridge, High Peak.  Born seven weeks premature and with an exomphalos, a defect of the abdominal wall that caused a part of his bowel and intestines to protrude outside of his body, the inspirational youngster has undergone 14 operations in his young life.

He is now preparing to take on his first ever run and competing in the Simplyhealth Junior and Mini Great Manchester Run on May 20th, in aid of the Royal Manchester Children’s Hospital.

Speaking on the experience Gino said: “What fantastico children, I am humbled to have met with them and their wonderful families.  A father of young children myself I know only too well how difficult it is to watch a loved one battle with illness or injury.  The strength and positivity of the children I have met today is nothing but inspirational.  I encourage everyone to get behind the Royal Manchester Children’s Hospital and support their fundraising campaigns.” 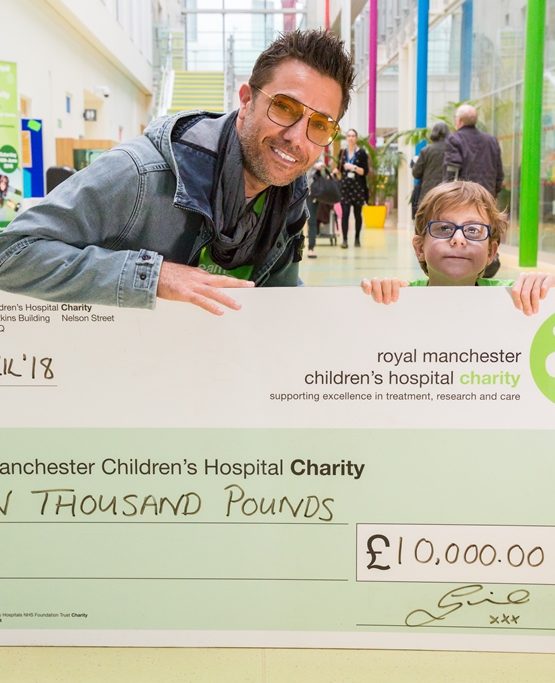