FUNDRAISING friends Hughie and Freddie have started an epic 100km challenge to help children with cancer across the nation.

The challenge will see them visiting all four corners of the UK and raising even more money for Royal Manchester Children’s Hospital Charity, as well as other oncology wards around the country.

The pair, from Burnley, have been avid supporters of the Charity since 2020, when Hughie Higginson was diagnosed with ALL (acute lymphoblastic leukaemia) and began urgent treatment at Royal Manchester Children’s Hospital. Determined to do something to support his friend, best pal Freddie Xavi set himself a challenge of running 2km every day in the 50 days leading up to Christmas Day 2020 – finishing his challenge live on BBC Breakfast on Christmas Day morning.

Since then the duo have received numerous awards, including the prestigious Pride of Britain award, and their fundraising has captured the hearts of audiences of both local and national media – helping to propel their fundraising total to more than £230,000 for Royal Manchester Children’s Hospital Charity.

Now the pair, who are both football fanatics, are doing a 100km challenge together – touring the UK to run 1km around each Premier League and English Football League club.

“I was too poorly to join Freddie on his first challenge, so I’m so excited that this time we get to do it together,” said Hughie, now aged 11. “It’ll be lots of travelling but it’s great that we’ll get to see all the different football grounds.

“There are 92 league clubs in total so that only makes 92km. So we’ll look at maybe doing some national stadiums and some other places to make it up to 100km.”

“This time we will be raising money for the oncology wards closest to each football ground, so the North West teams will still be for Royal Manchester Children’s Hospital, but others will be for their local hospitals,” explained Freddie, aged 10.

The boys, who are both from Burnley, started their challenge on Boxing Day by running round their favourite ground – Burnley FC’s home at Turf Moor. Joining them on the morning run was Radio 1 DJ Jordan North, who famously referred to Turf Moor as his “Happy Place” when he took part in I’m A Celebrity….Get Me Out of Here!

The boys have become accustomed to meeting celebrities now, and hope someone in the limelight will be able to join them on each of their runs.

Freddie’s mum Sarah Ronan said: “Wherever possible they’d like to do the run just before a game or during half-time, so they have the crowds there watching them. But of course, every football club has slightly different Covid rules and restrictions at the moment.”

Hughie’s mum Katy Higginson said the aim was to raise £1,000 for each of the 18 children’s oncology units dotted around the country. She explained: “We want them to be able to buy slushie pouches for the children. When the boys first started fundraising that was the first thing they wanted to buy for Hughie’s ward in Manchester.

“When Hughie was first diagnosed and going through the worst of his treatment slushies really helped soothe his throat. Some children get really bad ulcers from the chemo and sometimes they just want something cool to drink.”

Hughie and Freddie have so far run at Burnley FC on Boxing Day , Walsall FC on New Year’s Day and Birmingham City on 2nd January. Their next run will be Bolton on Saturday 29th January. The clubs where fans will be encouraged to donate to Royal Manchester Children’s Hospital will be: Accrington Stanley, Barrow-in-Furness, Blackburn, Blackpool, Bolton, Burnley, Carlisle, Crewe Alexandra, Fleetwood, Manchester City, Manchester United, Morecambe, Oldham, Preston, Rochdale, Salford and Stoke.

The incredible fundraising total means the boys have been able to not only help children on Ward 86 – Royal Manchester Children’s Hospital’s oncology and haematology ward – it can also fund projects that will benefit children throughout the hospital….

Tasty Treats
The money has ensured Ward 86 children can not only enjoy a supply of cooling slushies, they also have fresh deliveries of fruit such as strawberries and blueberries.

Music Therapy
This funds a weekly visit from a professional music therapist. The therapist plays music for and with the Ward 86 patients. They are specially trained to adapt their approach for each child and help inspire positive emotions and interactions. The therapists aim is for music to break through where words can’t.

Saving Lives
Royal Manchester Children’s Hospital has now purchased a Belmont Infuser for major hemorrhages. This equipment rapidly warms blood for transfusion to a critically ill patient who has sustained a life-threatening injury – for example after a car crash or a stabbing. The hospital had to deal with countless injuries like this following the Manchester Arena attack.

It’s important to warm the blood before giving it to a young patient to reduce the chance of shock or hypothermia. In a life-threatening situation it’s important large volumes of blood are warmed quickly. Thankfully this machine allows that to happen.

This room was designed with children and young people in mind, but since the pandemic has become underused and quite unloved. It’s strongly in need of a makeover to make it more accessible to young people.

New youth workers will soon be based at the TeenZone so the room will be used for a mixture of things – young people can use it to hang out, or they can attend 1-1 or group sessions involving the youth workers.

Hughie and Freddie will work with the hospital’s Youth Forum and Dr Marie Marshall to discuss design ideas and will even get to make choices about furniture, wall decorations and equipment (for example computer games, music etc). The young people may even choose to rename the room.

Robots of the Future

Hughie and Freddie are also keen to support Prof Ralph MacKinnon and his team in purchasing new robots for the hospital to use.

The robots look like young children and can respond in similar ways to humans – they can speak, their pupils can dilate, they can breathe and they have a pulse. They’re used for training staff on treating young people who are extremely unwell.

The hospital currently has some robots – coincidentally one is named Freddie! – but some are so well-used they are no longer fit for purpose. The hospital plans to purchase newer models of the highest specification and of varying age ranges. The new robots could potentially be named Hughie and Freddie.

Georgia Sleigh, Royal Manchester Children’s Hospital Charity’s Community Fundraising Officer, said: “When you look at the projects Hughie and Freddie want to fund, they stem from things Hughie has experienced himself. He understands more than anyone what an amazing difference these projects will make to the hospital and to children like him.

“Hughie and Freddie are so passionate about helping other children and every time I meet them or we video chat their enthusiasm is so humbling.

“I can’t wait to join them at a few of their Manchester-based stadium events – although I’ll probably leave the running to them!”

To donate to Hughie and Freddie’s fundraising visit https://www.justgiving.com/fundraising/freddie-xavi or text FRIENDSHIP to 70450 to donate £5. Texts cost £5 plus one standard rate message. Manchester Foundation Trust Charity, the parent name of Royal Manchester Children’s Hospital Charity, receives 95% of this donation. This service is provided by Donr – see full terms and conditions here.) 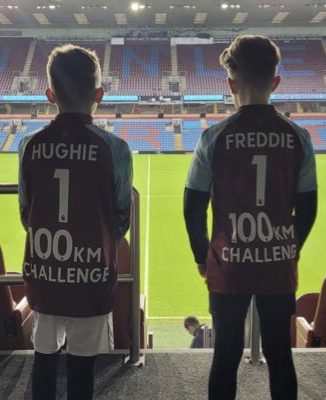