A Safe Way To Remember Your Loved Ones In 2020

AN NHS scientist has found a fitting way to pay tribute to her mother – remembering her with a Charity walk at Dunham Massey.

Connie Lewis was a retired and much-beloved lollipop lady from Sale, who liked nothing more than going out for walks and bumping into the generations of families she’d helped to safely cross the road.

Sadly Connie passed away earlier this year aged 83, but the Covid restrictions meant the family couldn’t hold the funeral service and wake they would have wanted.

So now her daughter Dr Helena Lee has taken part in a special Forever In Our Hearts walk, to remember her mother and raise money for Wythenshawe Hospital Charity as a thank you to the staff who looked after Connie before her death.

“She was so well-known in Sale, everyone would always wave to her or say hello in the street,” said Helena. “My son Matthew would always say ‘wow Grandma, do you know everyone in Sale?’ because whenever they went out together she’d always be stopped by people who knew her from being a lollipop lady.

“One person even stopped her in the lift in the M&S in Altrincham because they recognised her as the Rose Queen of Stretford from 1952!” Helena, her husband Chris and dog Neo did their Forever In Our Hearts Walk on Sunday to raise money for Wythenshawe Hospital Charity.

The event was launched by the Charity last year and took place in Heaton Park in November 2019. Sadly the current restrictions meant this year’s event couldn’t be held in the north Manchester park – but families are still invited to take part and perhaps choose a route or place personal to them.

Registration is just £10, which includes a free Charity T-shirt. Anyone who raises more than £40 will also be sent a candle and a special packet of seeds to plant in memory of their loved one.

Helena, who works in the renal transplant team at Manchester Royal Infirmary and is mum to children Rebecca and Matthew, said: “We chose Dunham Massey because mum and dad used to take me and my brothers, Grant and Richard, there as kids. Whenever I’m there it always reminds me of those times.”

Helena and her family have raised money for F6, as this was the unit that fitted Connie’s pacemaker. She had been fit and well and enjoyed her daily walks until November 2019, when she woke up very unwell.

“She ended up in A&E at Wythenshawe and she was diagnosed with heart failure,” said Helena. “She was suffering from breathlessness and swollen ankles so I’d thought that might be the case.

“After that she was in and out of hospital for a few months. She had a pacemaker fitted and she was out of hospital before the March Covid cases really started. But I felt sad because the pacemaker gave her a new lease of life but then the restrictions meant she couldn’t go anywhere.

“In the end I’m not sure what happened to her, but she collapsed at home in June. I went round because she wasn’t answering her phone and she later died at Wythenshawe.

“Covid has meant we could only invite 10 people to the funeral, but we did have people paying their respects by lining the streets for the procession, including some of my colleagues, which really meant a lot to me. My team mates from the laboratory knew my mum very well and also provided a floral tribute. We’ve also done some nice things online such as posting photos on a virtual remembrance site and we’ve been able to light candles and make donations. After the funeral we could only do a few socially-distanced drinks in the garden with a small group, so the walk was another nice way to pay tribute to her.” Forever In Our Hearts walks are taking place until the end of the year and can be done in memory of a loved one, regardless of when or where they passed. Entrants are asked to register before 11pm on Sunday, 20th December to ensure their pack arrives on time.

Donna O’Reilly, Senior Community Fundraising Officer at Manchester Foundation Trust Charity, said: “Unfortunately we cannot all come together to remember our loved ones this year, but that does mean we can encourage families to choose a place that might be more personal to them.

“Just like Helena, we’ve heard of many families unable to do the tributes and remembrance events they would have liked to this year, so we were keen to still hold this event in a virtual way.

“Although we can’t be together, as a Charity we will support all our Forever In Our Hearts participants in their walks and offer any advice they may need.”

To find out more about Manchester Foundation Trust Charity and to sign up for your own Forever in Our Hearts click here. 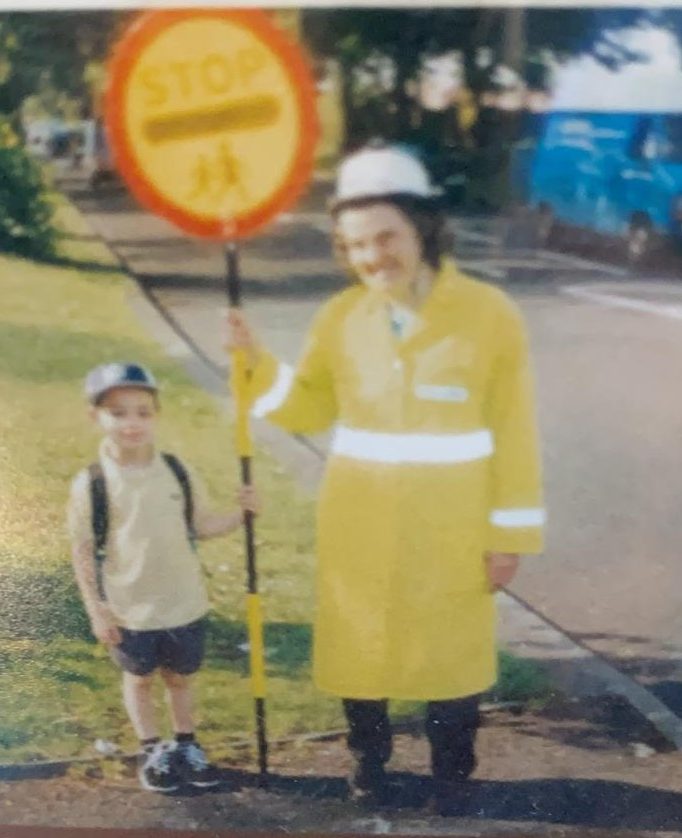 Connie pictured at work as a lollipop lady in Sale. Many Sale families would recognise her when she was off duty too!