A MOTHER expecting her first baby girl suddenly collapsed and died before getting the chance to meet her.

Rachel Molloy was just 36 when she passed away at Wythenshawe Hospital in Manchester last month. Within a few hours, her husband Nick went from being an excited daddy to a widower who faced losing his newborn daughter too.

Rachel hadn’t known she was expecting a little girl, instead choosing to wait until the birth to find out. It was one of the last things Nick was able to whisper to her before she died.

“If we had a girl we’d planned to name her Isabelle Rey,” said Nick, 35. “But when I knew what was going to happen I changed it to Isabelle Rachel instead.

“Rach never got to meet our little girl. It breaks my heart to think that Isabelle will never get to meet her mother. But I know Rach’s memory will live on in her children and everyone who knew her.

“Rach and I have had so many amazing adventures together and through thick and thin have always been there for each other. I’ve never trusted anyone as much as Rach. She was the light of my life and my true soulmate. I can’t imagine this world without her, because she was my world.”

Rachel hadn’t suffered from any symptoms during her pregnancy which had been just as smooth and uneventful as the first pregnancy. Just days before she died, Rachel, Nick and James (who turned three on 7th June) had enjoyed a day out on Easter Monday, taking advantage of the glorious weather by spending the day outdoors.

But on 24th April, when Rachel was almost at full term and just six days away from her due date, she started having abdominal pains. Nick drove her to Wythenshawe Hospital but then the aneurysm ruptured and Rachel collapsed in the car park.

“By the time she arrived she was in all sorts of bad shape,” explained Nick. “Staff ran over to help us and got her into hospital and they found a heartbeat, but she wasn’t breathing. Then they had to c-section Isabelle out because Rachel’s heart had stopped.”

Rachel suffered a cardiac arrest and was placed on ECMO (extracorporeal membrane oxygenation). The machine essentially takes over the patients’ heart and lungs when normal resuscitation methods have proved to be unsuccessful. Sadly it wasn’t able to save Rachel and she passed away in the early hours of 25th April.

As Rachel’s body had started to shut down before the c-section, Isabelle was also affected. It’s not known what lasting effects this will have on her, but she no longer needs the support of a ventilator. She is currently being cared for by teams on the neonatal intensive care unit at Saint Mary’s Hospital in Manchester, but the long term consequences of any brain damage won’t be known for quite some time.

“You hear of tragedies but they don’t really hit home for you – they happen on the news and in films,” said Nick. “But when it happens to you, you just can’t believe it. If this hadn’t happened to Rach then Isabelle would have been fine – she would have been a little early, but she was a healthy weight and had no development problems.

“She’s come a long way in the two months, but it’s a very long road ahead.”

It’s the care his wife received at Wythenshawe, and the amazing staff at Saint Mary’s looking after Isabelle who have inspired Nick to raise money for the two charities which support the work of the hospitals – Wythenshawe Hospital Charity and St Mary’s Hospital Charity, both of which come under the umbrella name of Manchester Foundation Trust Charity. Initially hoping to raise a few hundred pounds, the JustGiving page Nick set up at has already exceeded £16,700.

“Something like this changes your reality and makes you realise how awful a terrible tragedy can be,” said Nick. “These sorts of things happen and you don’t hear about them and you just carry on oblivious.

“In my mind, if this money helps save someone’s life or stops another family from going through something horrible, then it has done its job. I’m holding onto that thought, because I’m really struggling to see any other good that can come of this.

“I want to help people now. My perspectives on life have completely changed.”

Nick and Rachel met in 2009, after they’d started to message each other on a dating site, as Nick jokes “before it was cool to meet people online”. Their first date in Manchester ended with a kiss, and within a few months they were planning to go travelling together.

Thirteen months into the relationship, they both took sabbaticals from work and set off for South East Asia, heading to Thailand, Cambodia, Vietnam and Laos before flying to New Zealand to tour the country in a camper van.

“It feels like another lifetime now,” said Nick. “It was an amazing adventure and we both had the most fantastic time. We both love the outdoors so New Zealand was the perfect place. After travelling together I knew this was the woman I wanted to marry.”

In keeping with the travel theme, Nick decided to propose during a holiday in Venice, while the couple were enjoying a gondola ride.

“The gondolier knew what I was going to do but he hadn’t told me you shouldn’t stand up and move around, so when I got up out of my chair to get down on one knee, the boat really started rocking and I was worried I might fall in,” said Nick. “I’d picked a moment which was fairly quiet, but once I was on one knee this massive boat full of Chinese tourists showed up. They were all clicking away on their cameras, taking photos of me trying not to wobble as I asked her to marry me.

“I’m a hopeless romantic. It was still romantic – but not exactly what I had in mind!”

The couple officially got married at the registry office in Manchester, but count the real date as 21st June 2014 when they held a blessing ceremony in Spain with 77 guests. (They should have been celebrating their fifth wedding anniversary last week.) Nick and Rachel hired a villa and held the humanist wedding ceremony in an old converted stables.

In 2016 little James came along and on 24th April this year Isabelle was born. Rachel died in the early hours of 25th April 2019 and her funeral took place on 16th May.

“My own birthday was 9th April and Rachel made me a card,” said Nick. “In it she’d written ‘to a fantastic Daddy. I can’t wait for our next adventure as a family of four’.

“James will forever remind me of Rachel every time I look into his eyes. He is so much like her and when you see photographs of Rachel at his age they could almost be the same person.

“Rachel was a very driven person and never took her foot off the pedal. She was the go-to person for all her friends when they had questions about career, cooking, relationships, anything. And she was a wonderful mum. She lived for the kids.”

Nick’s focus now is on James and preparing to welcome Isabelle home when she is discharged from hospital, over the next couple of weeks.  She is being fed through an NG tube to her stomach and Nick has been taught how to feed her with the tube. Once the staff at Saint Mary’s are happy that she is stable and healthy he’ll be able to take his daughter home to Sale.

“Nothing anyone does will change what has happened to us, but hopefully the JustGiving page will help other families,” said Nick. “I feel hopeless and powerless. I can’t rewind the clock and change things – but I can make the best of a truly awful situation by doing something positive.

“£16,700 is just an incredible amount and that’s mostly from people we know. I think donating gives people that sense of ‘I’m helping’. And as I say, if it goes on to help another family or save a life then something good has come out of this terrible tragedy.”

Sarah Naismith, Director of Manchester Foundation Trust Charity, said: “No one at the charity, or indeed the two hospitals, can quite grasp what has happened to Rachel – it is such a sad and tragic story. The fact Nick has been able to think of others through this awful experience is nothing short a miracle.

“I can’t emphasise enough how truly moved we are that Nick wants to help other people and we’re incredibly grateful to each and every person who has made a donation, either at the funeral or via the JustGiving Page. Thank you.”

Please visit justgiving.com/fundraising/nicholas-molloy19 if you’d like to make a donation.

Please note the family, extended family and friends of Rachel Molloy do not wish to be contacted by media and we ask that you respect these wishes.

If you are a member of the press and wish to ask any questions please contact email Press Officer Emma Wright on emma.wright2@mft.nhs.uk or call 0161 701 5114. 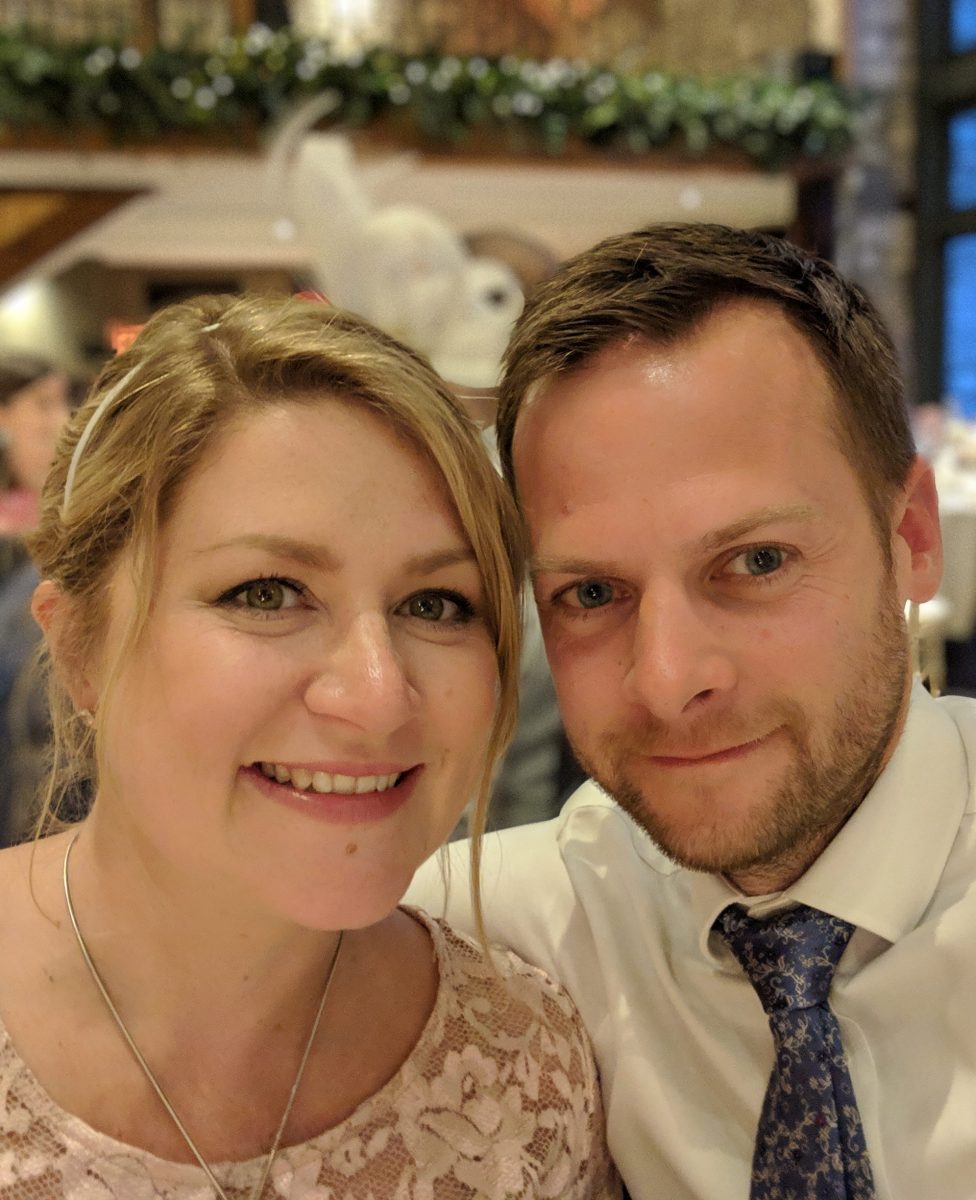