A POPULAR miniature railway which has faced floods, break-ins and lockdowns is finally able to host a fun day for Royal Manchester Children’s Hospital Charity.

Brookside Miniature Railway in Poynton had originally planned to host a fundraising event for the children’s hospital in March 2019, as part of a grand re-opening after it suddenly closed in 2018. But railway managers and volunteers at the much-loved family attraction have faced “every disaster possible” and had to keep postponing the event.

Now they are finally able to host the fun day on Sunday, 20th March from 10.30am-4pm. All the normal ride fees will apply but for the fun day they will be collected by the Charity instead.

One attendee who can’t wait to ride the trains is four-year-old Percy Sherwood-Brown. Percy is not only a huge miniature train fan but is also a current out-patient of Royal Manchester Children’s Hospital after being diagnosed with acute myeloid leukemia in March 2020 when he was just two years old.

Percy’s mum Karrie said: “Throughout his treatment Percy has been on the Oncology and Haematology Ward, but he has also been on the Intensive Care Unit and the Bone Marrow Transplant Unit – so we know the hospital very well now.

“It’s not a place you ever want to be as a parent, but honestly once you’re there the staff are just all incredible – they’re so supportive and Percy has been really well looked after. That’s so reassuring when you’re going through leukaemia with a two-year-old. We’re so grateful to the hospital and want to do whatever we can to support them.

“Percy is a huge train fan too so he can’t wait to visit Brookside again. And this time he’ll get to meet the Charity’s mascot bear! He can’t wait.”

Chris MacKenzie MBE, one of the railway directors, said they can’t wait to welcome Percy and all the young children to the fun day, especially after so many delays in putting the event on.

“The floods and the break-ins came first and then we had a bit of a running joke that all that was left was a plague. Then Covid came along and the whole world went into lockdown.

“It felt like it was one thing after another and it would have been very easy to feel defeated. But we have an amazing team of staff and volunteers who pitched in with some incredible hard work.

“We’ve had to rebuild pieces of track, clear up after the floods, we’ve had tunnels and track fail their engineering inspections, we’ve re-routed the course, we’ve had toys stolen…it’s been endless. But each time we’ve come back fighting.”

In 2019 the original fun day was cancelled due to bad weather which flooded huge areas in and around Poynton. This was coupled with a second flood in July 2019. Later that year, in August 2019, Brookside Miniature Railway was once again able to open its doors to customers thanks to volunteer help.

The managers had hoped to run the attraction for a few months before turning their attention once again to the charity day. But in February 2020 vandals damaged some of the fencing. Later that same month thieves smashed a window and stole some toys. The very next night there was a second break-in. The thieves broke through the temporary steal boarding, set up to give security where the window had been smashed, and once again stole some toys.

Brookside Miniature Railway was grateful to have the support of local artists, who came along to paint a mural over the damaged window area to make it look like a window with pretty window boxes running along the bottom. Another artist painted a mural in one of the railway tunnels.

But in March 2020 disaster struck again when the nation went into lockdown. The site was closed for 143 days but being an outdoor attraction they were luckier than some local businesses and were able to open sooner.

In summer they purchased a new train (know as a “loco”), called Mighty Max and the Poynton attraction was able to enjoy a successful Halloween and Christmas after putting in special Covid measures, including plastic screens and heightened cleaning between each ride.

But in the first half of 2021 Brookside Miniature Railway once again closed its door, finally re-opening in April 2021 after what organisers hope will be the closure.

Andy Prior, the railway’s Site Manager, said: “It’s been three years now but we’re determined the fun day for Royal Manchester Children’s Hospital Charity will finally be able to go ahead.

“We chose the Charity as a lot of our customers are children. We felt it was right to give something back to a charity which benefits so many young people in our area.”

The fun day will include a visit from Charity mascot Humphrey (a giant green bear who is very popular with children). As well as train rides, families will also be able to enjoy Keelings Vintage Fun Fair and music from a traditional jazz band.

All collections on the day will go to Royal Manchester Children’s Hospital Charity, which funds treatment, research and care projects for the 280,000-plus young patients who visit the hospital each year.

There will also be a raffle for the Charity, with prizes including meals out, a pamper package and vouchers for local shops.

Jo Thomas, Community Fundraising Officer at Royal Manchester Children’s Hospital Charity, said: “We’re so touched the team have chosen to fundraise for us in this way – asking for donations instead of selling tickets for the rides.

“We really hope lots of families will go along to have some fun, meet Humphrey and support a really worthy cause.”

To find out more about the Charity visit www.rmchcharity.org.uk 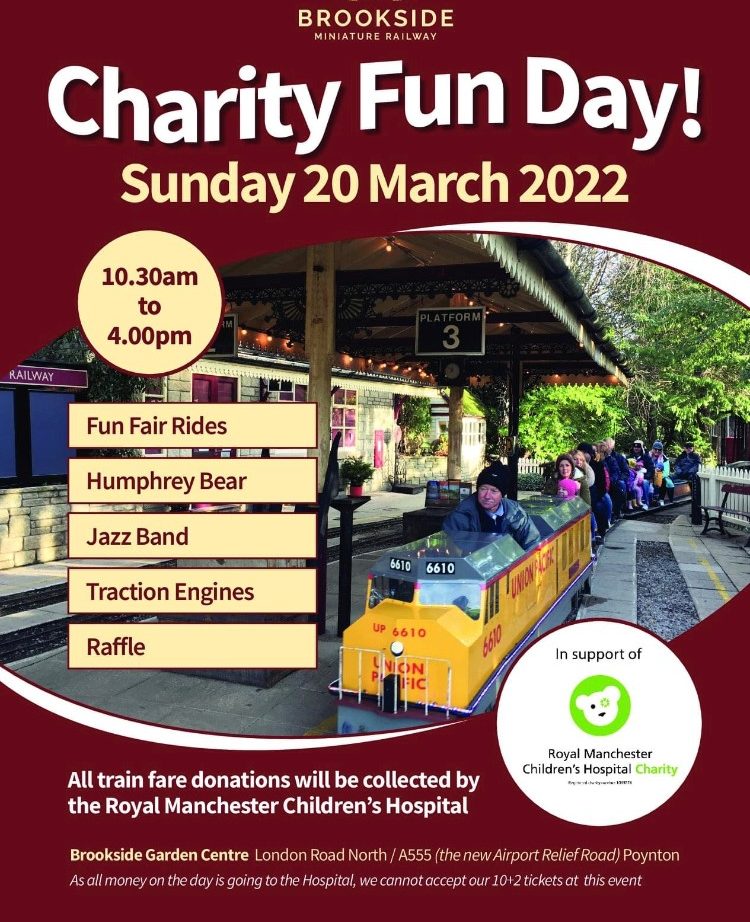